Do not attempt to diagnose yourself. Please see your physician if you have symptoms of pituitary disease. This listing of symptoms is not meant to replace a visit with your doctor.

If you are just learning about pituitary tumors and the many associated problems and hormonal disorders let us start with a frank discussion of where you are: Pituitary Tumors, though described in some textbooks as "benign" can be very aggressive and can do irreparable harm. Some can even be lethal IF NOT PROPERLY TREATED!!

Do not allow your physicans, or yourself or family to treat these tumors lightly or in a start and stop fashion. Get highly qualified professional help. As with cancer or heart disease, you need expert help, only. The last sixty years have been remarkable in pituitary endocrinology. In the 1930's for instance, Cushings Disease was a death sentence; patients lived an average of 4.7 years after presentation of illness. In the 1950's, the five year survival rate was 50%. The cure rate for microadenomas today is approximately 90% and improving. Experts in Neurosurgery and Pituitary Endocrinology have so improved the cure rate in a mere 60 plus years that the general medical community, and certainly insurance companies and others, tend to think of Pituitary Disease the way they think of Polio. The threat is over and the scourge has left us. Sadly, with Pituitary Tumors this is not the case. Each and every patient has to be evaluated and "fought for" or the battle may be lost.

These tumors act and grow differently in every patient. A correct diagnosis and treatment plan is essential for the survival of many of us. Yes, clearly, in many they are slow growing and may cause little apparent outward damage. Regretably, many with so called "incidental" or "non-secreting" tumors often have symptoms which their physicians simply forget or are untrained to ask about. Sexual function, mental health, overall ability to function and fit in, are all vital aspects of our lives. The tumor may not "take" our life but may in fact change it to the point of lowering the patient and his or her family into a "living hell". Study, learn, seek expert help and join the PNA as we continue to bring you the REAL facts about these insidious diseases and their often fateful consequences.

We do not mean to alarm you, but in the past eight years we have witnessed enough deaths and suffering to know with certainty that no one has the right to deceive you about the issues you face. We do not yet have ALL the facts, nor are we here to console you. We are here to inform and alert you about Pituitary and Hormonal disorders. If we help save your life and make it better, we have succeeded. Good luck and God Bless.

The pituitary is a small, bean-shaped gland located below the brain in the skull base, in an area called the pituitary fossa or sella turcica. Weighing less than one gram, the pituitary gland is often called the "master gland" since it controls the secretion of hormones. These substances have a dramatic and broad range of effects on metabolism, growth and maturation, sexuality and reproduction and other important bodily functions.

Listed below are the specific hormones produced by the pituitary:

Thyroid Stimulating Hormone (TSH)
As the name implies, TSH stimulates the thyroid gland to release thyroid hormones. Thyroid hormones control basal metabolic rate and play an important role in growth and maturation. Thyroid hormones affect almost every organ in the body.
Growth Hormone (GH)
This is the principal hormone that, among many other functions, regulates growth and metabolism.
Adrenocorticotropic Hormone (ACTH)
ACTH triggers the adrenals to release the hormone cortisol. This hormone, in turn, regulates carbohydrate, fat, and protein metabolism.
Antidiuretic Hormone (ADH)
which increases reabsorption of water into the blood by the kidneys and therefore decreases urine production.
Luteinizing Hormone (LH) and Follicle Stimulating Hormone (FSH)
These hormones control the production of sex hormones (estrogen and testosterone) as well as sperm and egg maturation and release.
Melanocyte-Stimulating Hormone (MSH)
Controls darkening of the skin.
Oxytocin
Stimulates contractions of the uterus during labor and the ejection of milk during breast-feeding.
Prolactin (PRL)
This hormone stimulates secretion of breast milk.
Vasopressin
Also called anti-diuretic hormone (ADH)- This hormone serves to allow the water to be reabsorbed by the kidneys.

In disease states, the pituitary gland produces either too much or too little hormone. Pituitary tumors (also called pituitary adenomas) may lead to overproduction of one of these hormones. In other instances, pituitary tumors are non-functional or "endocrine-inactive," meaning that they do not produce excessive hormones. As these tumors enlarge, compression of normal pituitary gland can occur, resulting in decreased or absent hormone production. This condition is called hypopituitarism and may also result from brain trauma, surgery, bleeding into the pituitary or from radiation therapy to the pituitary.

Any abnormality of the pituitary gland often means it produces either too much or too little of one or a combination of hormones. The effects cause changes either throughout the body or in one affected area. Also, enlargement of the gland may press on the nearby optic nerves causing visual disturbances and/or impairment.

The loss of pituitary function can be the result of a number of causes, such as congenital or genetic disorders, injury sustained to the mother or to the child during birth, head trauma, impaired blood supply, or following surgery to excise a pituitary tumor or radiation therapy for a pituitary tumor. Tumors on the gland itself are normally responsible for hypersecretion of hormones.

A pituitary disease can impact just about every part of a patient's life, from their physical appearance, sense of well being and emotional outlook, to their sexual function, general health and level of energy.

A pituitary tumor (adenoma) is usually a non-cancerous growth of unknown origin that depending on its specific location on the gland can affect different hormone-producing areas. The gland is divided into two main parts – the anterior lobe (which constitutes 80 percent of the pituitary by weight) and the posterior lobe.

The cells of the anterior lobe synthesize and release several protein hormones necessary for normal growth and development and also stimulate the activity of several target glands. Fluctuations either above or below the normal levels of hormones produced by the pituitary from the anterior lobe can result in any one of a number of diseases.

For instance, excess amounts of the hormone ACTH can result in Cushing's syndrome; an excess production of TSH causes hyperthyroidism; and hypersecretion of GH can result in either acromegaly or gigantism. Conversely, reduced amounts of GH can cause growth hormone deficiency syndrome in adults and children, (characterized by short stature in children). Other hormones controlled by the anterior lobe include LH and FSH, which when affected by a tumor can give rise to sexual symptoms in men and women. Increased production of prolactin can cause abnormal milk production, irregular menses and infertility in women; for men, increased prolactin levels can cause impotence, infertility, feminization and lactation.

Patients with a pituitary disorder have some combination of signs or symptoms of a tumor, which can include a constellation of emotional and physical symptoms, such as headaches or visual field defects. Along with vision impairment and headaches, physical symptoms may include any combination of the following: excessive thirst, sleep loss, abnormal body composition (i.e., more fat, less muscle, short stature, or enlargement of hands, feet and forehead), dramatic weight gain, decreased libido, impotence, lactation or irregular menses. Emotional symptoms may include mood swings, anger, depression or an impaired sense of well-being.

Many people with a pituitary disorder may go undiagnosed and untreated for as long as 15 to 20 years due to the varying and disparate symptoms among patients and slow onset of these symptoms. Contributing factors for the variations seen with symptoms include the patient's age, sex and extent of the disease. Furthermore, the medical community has considered pituitary disorders to be rare and difficult to detect.

If a person suspecting a pituitary problem seeks expert medical care, an endocrinologist or hormone specialist can easily diagnose and successfully treat the most common pituitary conditions. For instance, disorders such as acromegaly and adult growth hormone deficiency can be identified through a series of simple blood tests, most notably a test to measure IGF-1 (insulin-like growth factor).

Depending on the pituitary disorder, treatment may include surgery to remove the tumor, radiation of remaining tissue, pharmaceutical therapy or a combination thereof to either regulate ongoing hormone fluctuations or replace hormone deficiencies.

To assess whether you may be at risk, take our comprehensive 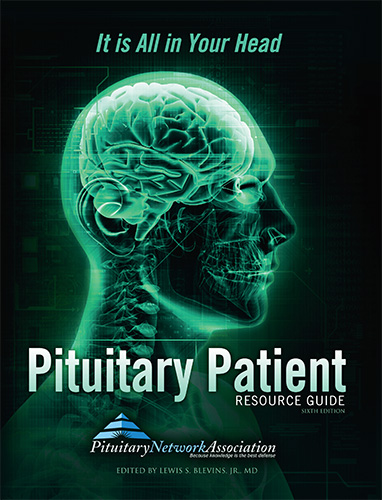 The print version of the Pituitary Patient Resource Guide is now available! A one of a kind publication intended as an invaluable source of information not only for patients but also their families, and all health care providers. It contains information on symptoms, proper testing, how to get a diagnosis, and the treatment options that are available.